10 Reasons Why Children Need To Connect With Nature 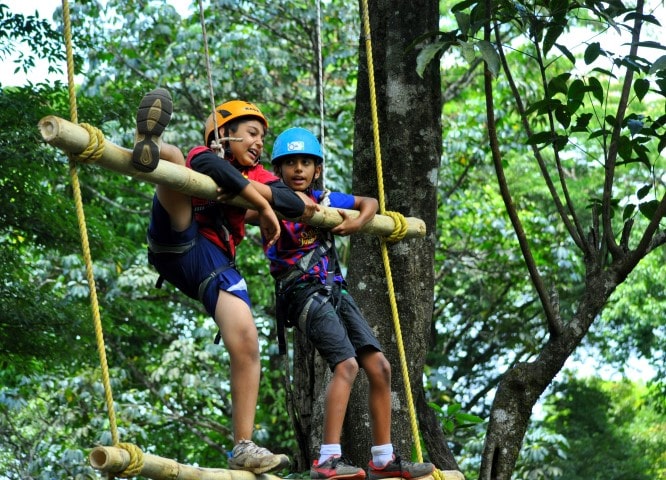 A common sight that greet parents at home is our kids and their friends strewn about the house, attached by invisible umbilical cords to electric sockets. This has become an even more common sight during the Covid-19 lockdown. Kids now have school online, hobby classes online, and being stuck in the house, Social media, Netflix and other streaming channels have become their best friends.

‘Our children are the first generation to be raised without meaningful connect with the natural world’, writes Richard Louv in his much-acclaimed book ‘Last Child in the Woods’. Little did he realise in 2005 that his movement to get every child outdoors would meet its opponent in a virus!

Richard Louv spent ten years traveling around the US reporting and speaking to parents and children, in both rural and urban areas, about their experiences in nature. He argues that sensationalist media coverage and paranoid parents have literally “scared children straight out of the woods and fields”. (1) His findings are relevant now, more than ever before.

1. The more high-tech our lives become, the more nature we need. We have a human right to a meaningful connection to nature, and we have the responsibilities that come with that right. Few today would question the notion that every person, especially every young person, has a right to access the Internet. We should also have access to the natural world, because that connection is part of our humanity.

2. Humans are hard-wired to love and need exposure to the natural world. Researchers have found that regardless of culture people gravitate to images of nature, especially the savannah. Our inborn affiliation for nature may explain why we prefer to live in houses with particular views of the natural world.

3. We suffer when we withdraw from nature. Australian professor Glenn Albrecht, director of the Institute of Sustainability and Technology Policy at Murdoch University, has coined the term solastalgia. He combined the Latin word solacium (comfort — as in solace) and the Greek root – algia (pain) to form solastalgia, which he defines as “the pain experienced when there is recognition that the place where one resides and that one loves is under immediate assault.”

4. Nature brings our senses alive. Scientists recently found that humans have the ability to track by scent alone. Some humans rival bats in echolocation or biosonar abilities. Military studies show that some soldiers in war zones see nuances others miss and can spot hidden bombs; by and large these tend to be rural or inner city soldiers, who grew up more conscious of their surroundings.

5. Individuals and businesses can become nature smart. Spending more time outdoors nurtures our “nature neurons” and our natural creativity. For example, at the University of Michigan, researchers demonstrated that, after just an hour interacting with nature, memory performance and attention spans improved by 20 percent. In workplaces designed with nature in mind, employees are more productive and take less sick time.

6. Nature heals. Pennsylvania researchers found that patients in rooms with tree views had shorter hospitalizations, less need for pain medications, and fewer negative comments in the nurses’ notes, compared to patients with views of brick.

7. Nature can reduce depression and improve psychological well-being. Researchers in Sweden have found that joggers who exercise in a natural green setting feel more restored and less anxious, angry, or depressed than people who burn the same amount of calories jogging in a built urban setting.

8. Nature builds community bonds. Levels of neurochemicals and hormones associated with social bonding are elevated during animal-human interactions. Researchers at the University of Rochester report that exposure to the natural environment leads people to nurture close relationships with fellow human beings, value community, and to be more generous with money.

9. Nature bonds families and friends. New ways are emerging to make that bond, such as family nature clubs, through which multiple families go hiking, gardening or engage in other outdoor activities together. In the U.K., families are forming “green gyms,” to bring people of all ages together to do green exercise.

10. The future is at stake. The natural world’s benefits to our cognition and health will be irrelevant if we continue to destroy the nature around us, but that destruction is assured without a human reconnection to nature.

It’s up to us to fill the nature deficit in our children’s lives.